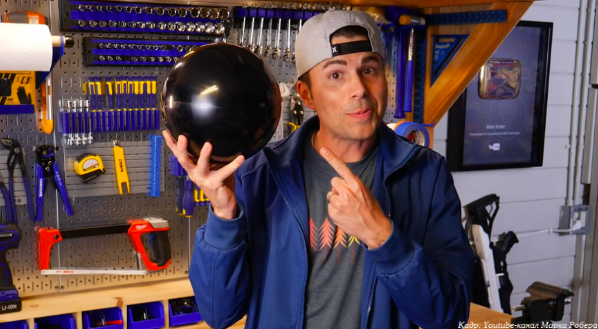 Mark Rober, an American engineer and a YouTuber discovered a secret behind consistently striking all the pins in just one try. It may look like he is using the Force, but it actually comes down to the bowling ball’s 3D-printed and electrical insides. Check this information with the best 3D printer under 500.

Let us show you how to use the Force without coming to the Dark Side.

The idea of building an automatic strike bowling ball has been on Mark’s bucket list for three years. James Bruton, another modern genius from the opposite side of the Atlantic ocean offered him a helping hand in order for the ball to be tweaked, assembled and 3D-printed as neatly as possible. James is a former toy designer that now specializes in additive technologies. He is a creator of remotely-controlled LEGO electric skateboard, VR-integrated conception of HyperReality, and of course, 3D-printed boxing robots. James has also fulfilled his dream of becoming a Guinness World Records title holder after building the world’s Tallest 3D printed sculpture of himself.

First, they had to saw some bowling balls and trim the insides in order to make a couple of prototypes. Then, they hanged a pendulum with servo motor inside the ball in order to be able to control its movements. As the pendulum swings, the center of gravity changes, and the pathing changes too. The pendulum is directed by an Arduino microcontroller via radio signals and two accelerometers. Each of the latter is placed inside the ball and onto the user’s back.

The user can alter the direction of the ball by tilting the body left or right. In a nutshell, it works just like the BB-8 droid from Star Wars, and other self-balancing toys. Actually, one of the droids made by Bruton was chosen as a basis for this automatic strike bowling ball project.

In order to get the strike, professional bowlers have to curve the ball in a way that ensures hitting the middle of pins from a right angle, causing the domino effect. This requires unimaginable amounts of mastery, because the ordinary bowling ball’s center of mass isn’t at the actual center point of the ball. That’s also the reason why novices fail again and again until they get used to it. In order to get ten strikes out of ten attempts, you’ll have to invest a lot of time to hone your skills or be unimaginably lucky. Another option being, as this article shows, to become a Jedi of engineering like Mark, and use the Force in order to get the desired strikes.

Unfortunately, the source files of this project cannot be found. However, you might want to take a look at Bruton’s GitHub repository nevertheless, because there is BB-8 there!

This video shows how the automatic bowling ball works:

Thinking of starting your own project based on 3D printing or maybe you’re a business owner who wants to cut costs by integrating additive systems into your production plan? Check out large-format 3D printers, for example, Raise3D Pro2 Plus. This industrial-grade high-precision additive system will allow you to significantly boost your profits.

Starting an online casino? Why you ...

Why do Stores Offer Discounts to th...