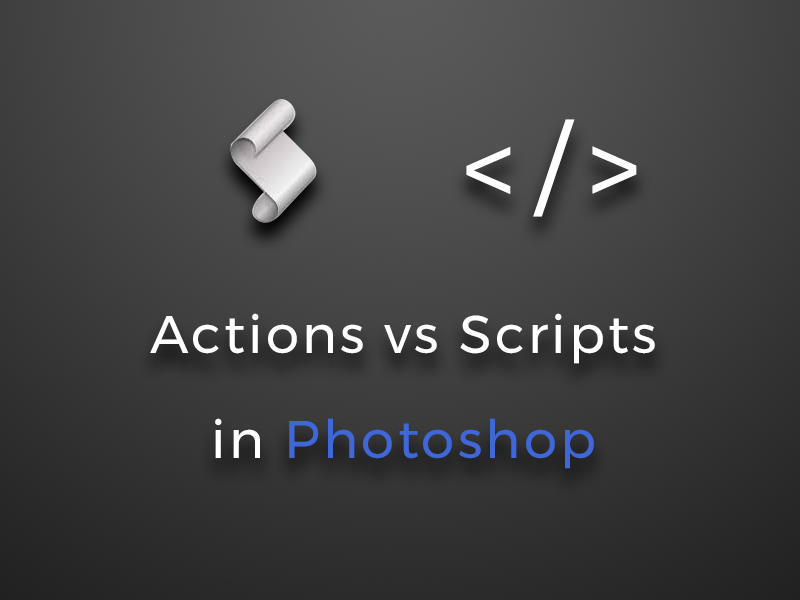 Actions and Scripts are some of the most powerful tools in Photoshop used to automate monotonous and mundane tasks avoiding manual labour and in turn, saving a lot of time. For this of you who are unaware, Actions in Photoshop are nothing but a set of steps performed in order to do a certain task. These steps are saved in the form of actions which can be used an infinite number of times. Photoshop automatically loads these actions and repeats these steps for you automatically.

Scripts, on the other hand, are a more complex form of the actions. While actions are great at performing a set of steps repeatedly, these are not smart. What if the steps are to be repeated but there is a certain change in each iteration or some variables are involved which need to be changed before performing each iteration. That’s where Scripts come in. A Script is a JS or JSX file consisting of javascript code providing instructions to Photoshop to perform a certain task. These scripts are written in Javascript and are based on the DOM of Photoshop, more of which we are going to discuss later.

With the basic definitions out of the way, let’s dive in the comparisons are test out which one is useful in which scenarios and balancing their pros and cons.

Actions are UI based, Scripts are not

Actions in Photoshop are a Tool present in the Interface of the Software and can be accessed easily from Window > Actions. Actions can be easily created and loaded from the Panel only and there is no need to go anywhere else. It is a user-friendly solution to our automation problems.

On the other hand, Scripts are hard-coded files which are written manually (or not) that need to imported in to Photoshop. Significant knowledge of Javascript is required in order to create a worthwhile script capable of doing something useful.

Scripts are Smart, Actions are not

As I mentioned earlier, Scripts are considered the more smarter form of actions. Both aim towards automation in Photoshop but Scripts can do it in a much more smarter way. If there are direct iterations involving simple steps, then actions are sufficient but if the iterations involve complexities such as variables and dependencies, then Scripts are the way to go. They are capable of handling complex tasks with a great ease.

Another factor that needs to be compared is the Setup Time. Actions are setup in a short amount of time as compared to Scripts. In order to setup an Action, you just need to go to Actions Panel (Window > Action), create a new Action and start recording. After that, you just need to perform the steps you need recorded in the action only once and stop the recording. That’s all there is to creating an action.

While on the other hand, Scripts are much more tedious proposition. It requires a great deal of time and skill to set up a script. There is no recording or anything like that in scripts. Everything needs to be done manually. It can take a lot of time in compiling a script depending on the complexity of the task that needs to be performed.

Actions are easy to Customize

Since actions are a collection of a number of steps required to perform a certain task, all you need to do to edit a task is select it and edit either by replacing it from a new one or simply deleting it. Enabling or disabling a step is just a click away.

While in scripts, if even a comma is misplaced, the whole thing is not gonna work. To customise a step, careful editions need to made to the code being wary of the syntax. Scripts are a bit hard to customise especially for a Javascript Novice and requires a keen eye.

Scope of Actions is Limited

When looking at the grand scheme of things, Actions fall short in terms of their scope. They can be used to iterate over a large number of properties but they cannot be used with all the properties and certain things just cannot be done using Actions. For Example, Placing 10 guides parallel to each other at equal distances. Sure, it may be possible to create an action to copy-paste a guide at equal distances but it would take running the action 9 times in order to reach the final result. While in Scripts, just a few lines of code is enough to create a set of parallel lines, no matter the count. Granted, Scripts have a learning curve but they provide a lot more versatility.

So, that’s that! Actions win against Scripts. Actions being more User-Friendly and easy to navigate, do have the upper hand. But Scripts also play a very important role in automation in Photoshop. It is like the Swiss Army Knife of Photoshop. When everything else fails, you can be sure the Scripts would come through. The major backdrop with Scripts is the huge learning curve and a good knowledge of Javascript and Photoshop DOM.

Why Blue is the Most Used Color for...

Artboards in Photoshop – What...

Different Ways of Selecting an Imag...